If you are a fan of Dragon Ball franchise, you have probably heard about that Hirumi Tsuru, old voice actor of Bulma, passed away on November 16th, so because of that, Aya Hisakawa is chosen to be her replacement.  It is officially announced by Toei Animation on their official twitter account. 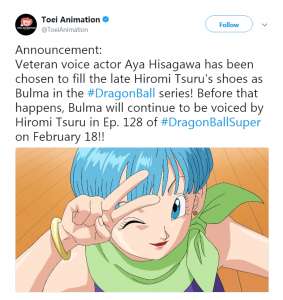 That means, Hiromu Tsuru will still be portraying Bulma, but they’re gonna be using stock audio in this week’s episode.

Also, there is a new TV commercial for Dragon Ball where you can hear Aya Hisakawa as a voice actor of Bulma for the first time. You can check it out here: